skip to main | skip to sidebar

Utterly amazed, at how spoiled, selfish, stubborn, self-absorbed, self-deluded and simply stupid a person can be. On one hand, I could be angry...or even pity the worthless fool...

But on the other hand, I've got bigger, better things to think about. :) So that's that!

He was a sweet little mouse, always nibbling on honeycombs and scaring the crappola out of me when I saw his furry body scamper across the floor. Oh Whiskers, I hope you're doing alright out there in the big cold world!

Although I have to say...Humane Mousetraps ROCK. 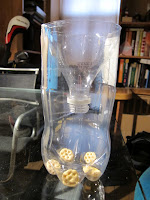 (at the point where the slope meets the straight part)

Step 2. Place honey combs or other goodies inside the bottle.

Step 3. Invert the cut-off top so that it resembles a funnel. Put it on top of the newly cut top. Tape it shut.

Step 4. Tape the bottom of the bottom to some board/folder/paper good that is flat and sturdy. 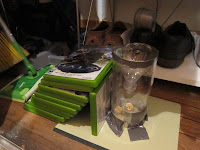 has been spotted. I would suggest you place some books or something as stairs for the little rascal. Then wait.

Step 6. Success! :) Whiskers, wherever you are - I hope you're enjoying some honeycombs! 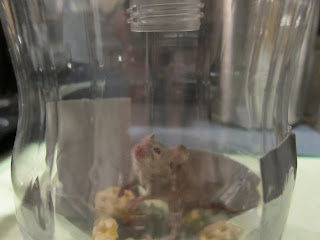 Second lesson learned of 2010…always do proper research before you take on a project! Or in other words, eat Haitian food before you attempt to reproduce/cook it. C and I recently kicked off our Global Culinary Challenge 2010 by launching a Cooking for a Cause* series. And given our cause, the Haitian relief effort, we thought it would make most sense to start of with…Haitian cuisine! Never mind that neither of us had ever tried Haitian, we figured it would be easy enough to pick up. Um...as you might have guessed - we were sort of wrong. We did manage to produce some dishes that tasted vaguely Haitian (plantains, rice & beans). Others that were good, but just seemed to miss the ethnic-mark (snapper, lamb stew). But others (read: griots) just left me scratching my head in confusion. Either way, it was a very fun night – and thanks to the lovelies who came! 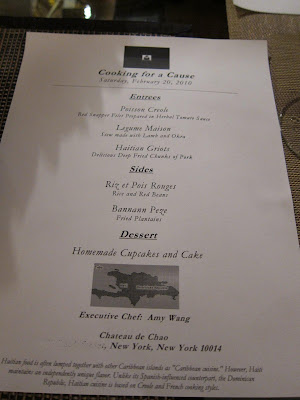 We started our day with a nice charity run for (I finished in 6,208 place haha) with marathoner, J.S., and Terry-Foxer, M.Y. It was a crisp Feb day, filled to the brim with high energy runners and supporters!

Now – specific pieces of advice for any other clueless cooks out there who wants to attempt Haitian. 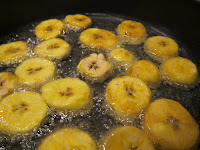 Plantains – not as easy to find as you might think in NYC! We scored diff local D’Agostinos, Whole Foods & Trader Joes – to no avail. How did we end up picking these suckers up then? We had to beg for scraps from the nice waitstaff at Havana Alma de Cuba. I think they gave us the older plantains, but either way – we had three nice long blackened bananas to work with.

Griots – described by various websites as ‘fried chunks of seasoned pork’…after hours of marinating (overnight), simmering (hours), deep frying (long enough) – we were left with small chunks of dry pork…fried. Theories abound over what went ‘wrong’. Perhaps we cut the pork cubes too small? Perhaps we shouldn’t have simmered for so long? And finally perhaps we should have deep-fried it in a shallower (therefore, hotter/faster) pan of oil. ??

Rice & Beans – before you try this, you might want to get a mortar & pestle to properly ground up the herb/spice mixture. Lacking this device, I was left crushing via spoon for WAY too long.

Snapper & Spicy Lamb Stew – in my opinion, the preparation for these dishes was actually pretty standard and well-known! Besides for okra (which is really easy to prepare despite it's inherent stickiness) everything was by-the-book-Amy-style. :) But then again, it tasted pretty “normal” to me (meaning…non-ethnic)

*Cooking for a Cause Details – A culinary series where we shall endeavor to cook new and different ethnic cuisines every month and feature the results at a dinner party. Dinner party guests are encouraged to “donate” a small amount of $$ to our cause. At the end of our series, we will donate the total lump sum to Haitian relief charities. 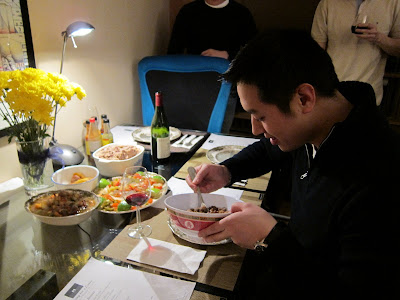 Mike, excited to dig in to stew? Haha

Well still – Cooking For a Cause Dinner #1 - COMPLETE! Suggestions welcome for the next course.

DO NOT LEAVE THE GAS-POWERED OVEN ON BEFORE LIGHTING IT UP WITH A MATCH. RESULTS MAY BE DISASTROUS.

What started off as a merry, sweet little adventure to make some Valentine's Day themed sugar cookies turned this Wang into a crispy-haired, limited-eyelashes, singed hand idiot. Remember kids, if the oven is gas-powered - please be extremely careful when lighting a match. And always light the match IMMEDIATELY to avoid overexposure to gas. Because kids, you might not always be as lucky as this idiotic Wang...and fire burns HURT!!!

No more baking, particularly in C's oven, for a long long time...
Posted by amy2 at 7:44 AM No comments:

I had dinner with a good gf last week (btw, Mermaid Inn in the E Village? Adorable, delicious and a perfect date/girly catch-up spot!) and invariably...our conversation turned to waiting. In her case, she is waiting for feelings of certainty...for the confirmation...for...the rock. I suppose in my case, I am also waiting for certainty..for confirmation...for....an interview invite (or three, two).

This is a conversation that has been coming up with alarming frequency. The numerous chats of 'when will this' and 'when will that' over cups of coffee/tea (ok fine, glasses of wine/cocktails more likely) are starting to blur. As we progress further into our adult lives, worrying about increasingly "adult" issues - it seems that the the choices we make are starting to actually direct our life path. The random career/love/family choices you made at ~22-23 are starting to catch up to you. But those "supposed" 30-year old choices seem just a little out of reach. And inbetween those big/small choices, we're left twiddling our thumbs. Just...waiting.

But really, what's so terrible about waiting? Used properly, the notion of waiting can conjure up grand ol' feelings of anticipation, eagerness and hope. Waiting for something, believing in something...sure beats the heck out of not waiting for anything right? Sooner or later, one day you'll look back upon these gut-wrenching days of just waiting with nostalgia and a fond remembrance.

That being said....fark that! My gut is churning and my palms are sweating. Where are the rest of those interview invites?! And then....gasp.....acceptance(s) or god forbid rejection(s)?!!! Minor freak out here!

Ok, so with D wedding planning, gay birthdays and baby showers...C and I have been a little busy - we haven't started our Global Culinary Challenge yet! But somewhere between the massive W Village overeating, intense scrabble games and the Master Cleanse (C, not me...I'm on a weeklong no-cookie pledge)...we did manage to pull out a little dish from the motherland (island). A fav of drooling Taiwanese people around the world...Zha Zhiang Mien! 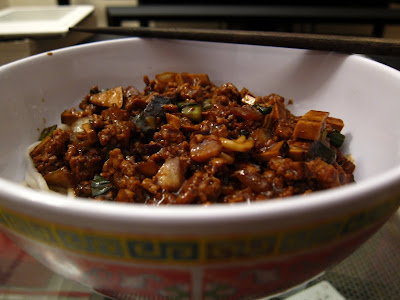 Oh wait, there was ONE thing we did manage to sneak in on top of our busy busy schedule...PENGUINS! I'd post this incredibly adorable video of penguins waddling....but I don't know how. Haha, anyhows - thanks C for bringing real live penguins into my life! :D

My mom always said, that as a pig (my Chinese zodiac sign) - I would have a lucky life insofar as I would always have something good to eat! And as moms typically are, she was right. I have been rather fortunate with all the tasty things in life. But so what? What does this have to do with 2010? 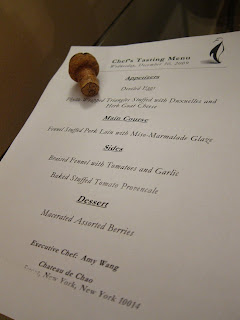 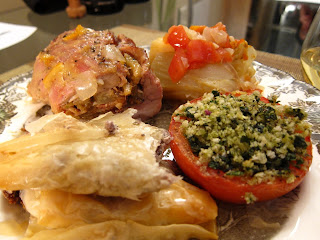 Despite some hiccups with the oven (we had to call the super to figure out how to turn the oven on), and much help from the trusty manual-Chao-dicer, C and I were able to pull out a very successful first dinner! While I have cooked most of the sides at one point or another...the smash hit of the evening was my tentative experiment with orange & miso...the miso-marmalade glazed pork loin stuffed with fennel.

With those savory memories under our belt...we began to discuss the possibility of formulating our very own little culinary challenge. Prompted by an endless barrage of food network/travel channel/julie&julia shows...we have decided to take a crack at cooking our own way through the different continents! We'll be sure to try and rep G Wang's little current island home too... ;)

Details TBD as C is currently in charge of determining the rules and guidelines.
Posted by amy2 at 7:06 AM 1 comment: